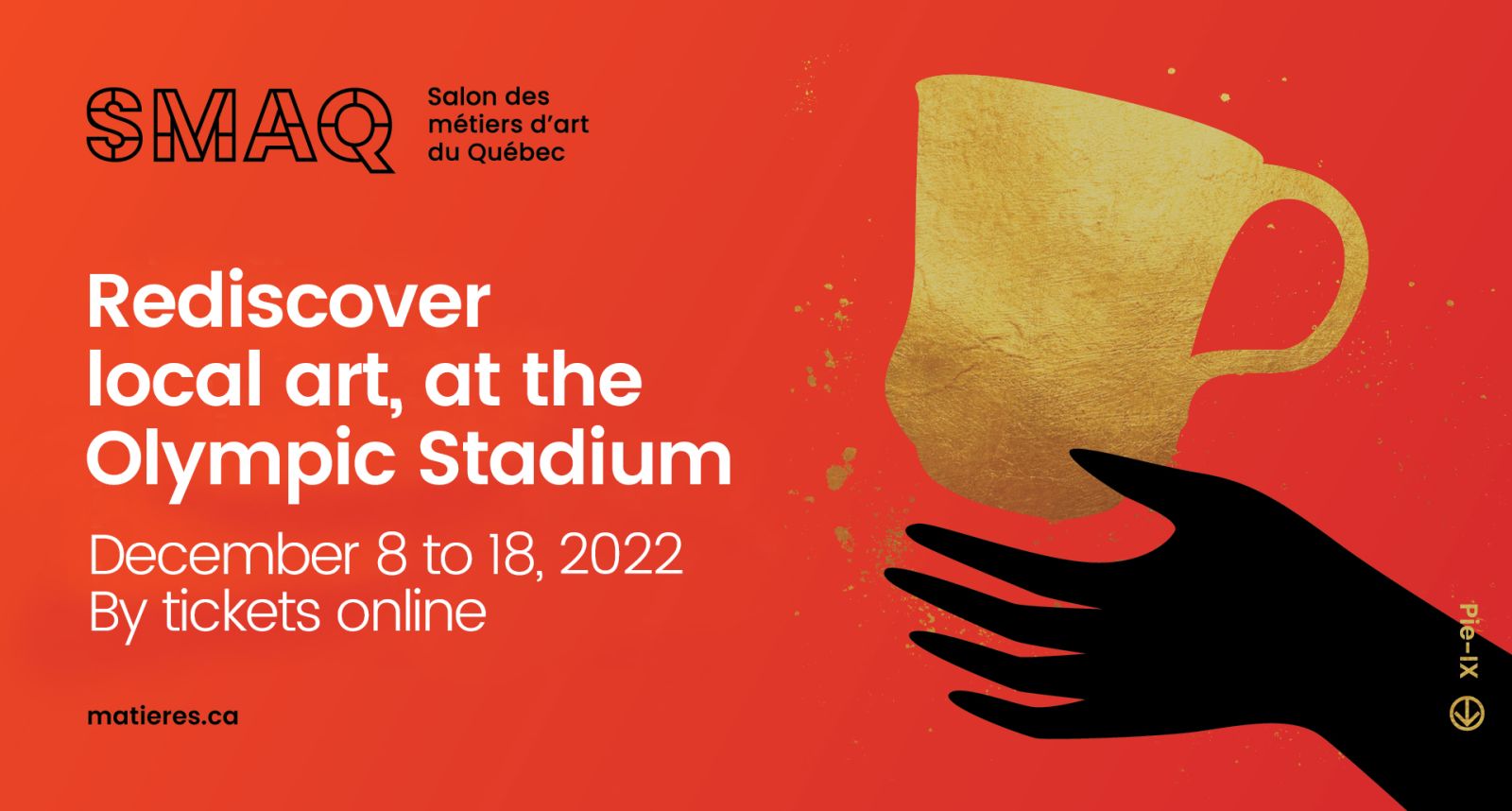 TICKETS ON SALE ONLINE AND ON-SITE

*All taxes and fees are included in the price.  | Tickets valid for the duration of the 2022 SMAQ.

This year’s theme for the Salon des  Métiers d’art du Québec (SMAQ), “Retrouver l’art d’ici,” is an open invitation to reacquaint yourself with the best of Quebec fine crafts. From December 8 to 18, 2022, join over 180 professional artisans gathered under the luminous dome of Montréal’s emblematic Olympic Stadium. Get ready to be utterly charmed by their talent and expertise as we celebrate our 66th Salon!

Next stop: the Olympic Stadium

As the second half of the UN conference on biodiversity, COP15, is scheduled to take place at Montréal’s Palais des Congrès on the same dates as the SMAQ, we’ve moved this year’s venue to the Stadium. “The Salon welcomes nearly 100,000 visitors every year, Julien Silvestre, Executive Director of the Conseil des Métiers d’art du Québec, tells us. “Although the change in venue was a late addition to the event, our team has gone all out to ensure they find the same high standards and excitement they’ve come to expect. The Salon des Métiers d’art du Québec is by far the largest event showcasing locally made products in Canada. It’s the best place to meet artists and artisans who are not only from Quebec, but whose business models also meet most of the United Nations’s Sustainable Development Goals.”

The finest in Quebec crafts, expertise, and entrepreneurship

Our Quebec micro-enterprises follow exemplary business models based on the use of directly sourced, locally transformed materials. As they’re less dependent on more energy-intensive manufacturing processes, they’ve remained remarkably resilient. It’s an industry on a human scale that weaves seamlessly into every region throughout Quebec. Our micro-businesses are the eco-responsible alternative to mass production, primarily serving small-scale local markets, limiting production to meet a more modest demand. “Artisan entrepreneurship should serve as an example of a sustainable, responsible economy at COP15. Artisans have long and humbly espoused values that contribute to the environmental resilience and responsible development of Quebec and Canadian territories. These are the values we should work to promote on a grand scale.” – Julien Silvestre.

It’s great to be back! | Christian Bégin, spokesperson 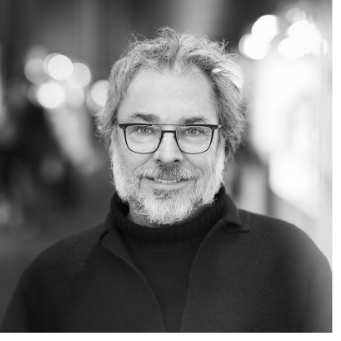 Hurry up and slow down…

Hurry up, slow down. Beautiful things come together one stitch at a time. If at first you don’t succeed… What do we mean when we say stuff like this, exactly?

Nicolas Boileau—I never knew the man, personally (!)… but I find his words inspiring. I like what he says about time. It takes time to “do” things, to give things meaning, and make sure they live on after we’re gone. It’s work that is food for the soul and I love each word that calls me to action. It’s work that is bread and butter for our artisans—revolutionaries!—veritable repositories of traditional skills and know-how that are the keys to the world’s survival. Their community is a palisade against the cataclysm that hovers on the edges of the horizon. We ABSOLUTELY need them. They will always be essential.

I also like the courage that these words evoke. It takes a lot to resist the steamroller of supposed progress. In the end, progress just dilutes the truth of things, emptying everything around us of all meaning, shepherding us, in the name of unbridled capitalism, toward mindless, compulsive consumption, as if that could fill the void it has left in its wake.

Buying Local Art is not reckless squandering, it’s a choice. It’s choosing US. Choosing Quebec. I’ll even go out on a limb and say it’s a way of “ARMING” us against the growing possibility of total system collapse. Our way of doing things will soon reach its limits, implode, spontaneously combust… Harsh words, you might say. All right, I’ll admit it.

But, are they? Really? Our artisans are our last line of defence—forging, tracing, carving paths of possibility, thumbing their noses, and giving a great, big, one-finger salute to the jobs of mass destruction our globalized world has devised to divide, conquer, and dehumanize us.

I invite you to join that community of resistance fighters, embrace the movement, and make Local Art the emblem of your commitment to making tomorrow about US, who WE are, and what WE as a community believe in.

Shout it from the rooftops. Buy Local Art! WE ARE THE ANSWER to the metaphorical machine that sucks all meaning out of time. Time is not money. Time is a weapon of mass reconstruction. Take the time. Choose Local Art!

Hurry up, slow down, and choose US!

The SMAQ is the most anticipated Quebec arts and crafts show of the year. It features over 180 seasoned artisans and emerging artists who help forge our collective identity and invigorate our economy.

Our passionate spokesperson, Christian Bégin, is back for a fifth year in support of our talented professional artisans. He’ll be joined by Lolitta Dandoy, one of Quebec’s most influential fashion journalists and bloggers and one of Canada’s top fashion celebrities. She’ll be providing an urban, eco-responsible take on the exhibitors and their work. As Studio MA’s Fashion Host, she’ll be presenting interviews and surprise VIP events complete with tastings of some of the local products, glasses of sparkling wine, grab bags full of surprises, and tons of great fashion finds! VIP Events: Places are limited. Book online to reserve your spot.

The Pavillon des Saveurs will showcase quality products that are the pride of our regional producers, food artisans, and passionate chefs. The Architecture and Heritage Pavilion is where visitors can discover those specializing in heritage conservation and restoration, such as stone carvers and artisan blacksmiths. Heritage renovation projects differ from typical building renovations in that they require a specialized workforce to carry out substantial yet respectful repairs or rehabilitation work.

VIDÉOTRON and Studio Métiers d’art, a webcast that spotlights local creators, will be back to put a new spin on the art of fine crafting. It’s a unique chance to take part in creative encounters with artisans and a rare peek into their craft, techniques, stories, and even the fruits of their labour.

Télé-Québec’s digital platform, La Fabrique Culturelle, will be presenting CinéMA métiers d’art, showcasing crafts from around the world through photos and film. Those who want to try their hand at creating can visit the Atelier des possibles, a creative interactive space with activities and live demonstrations. A call to action for the next generation of designers, “1001 BONNES RAISONS” is a contest in creative design and development aimed at supporting and promoting emerging designers. Visitors who’ve always wanted to know what goes on behind the scenes of a fashion magazine will get their chance to join the creative crew on a photo shoot. At 1 p.m. on December 9.

The MATIÈRES À DÉCOUVERTES contest is back

From December 8 to 18, go on the hunt through the booths for the three Matières à découvrir stickers we’ve placed among the booths. To participate, fill out the contest entry form (at the Salon or online) with the three booth numbers where you found the stickers.

This year, there are nearly $5,000 in prizes up for grabs, including a relaxation package at Strom spa, jewelry from the Amulette boutique by Bénédite Séguin, a pair of tickets to Révolution en Tournée in Montréal for February 2023 (courtesy of Québecor Expertise Médias), a pair of tickets to the 2023 Mural Festival (courtesy of Vidéotron), and a pair of tickets to the musical Les Choristes. The Fairmont The Queen Elizabeth will be offering the Grand Prize, a package for two including an overnight stay with breakfast in the prestigious Jean-Claude Poitras Fine Craft Suite (approximate value of $3,500).